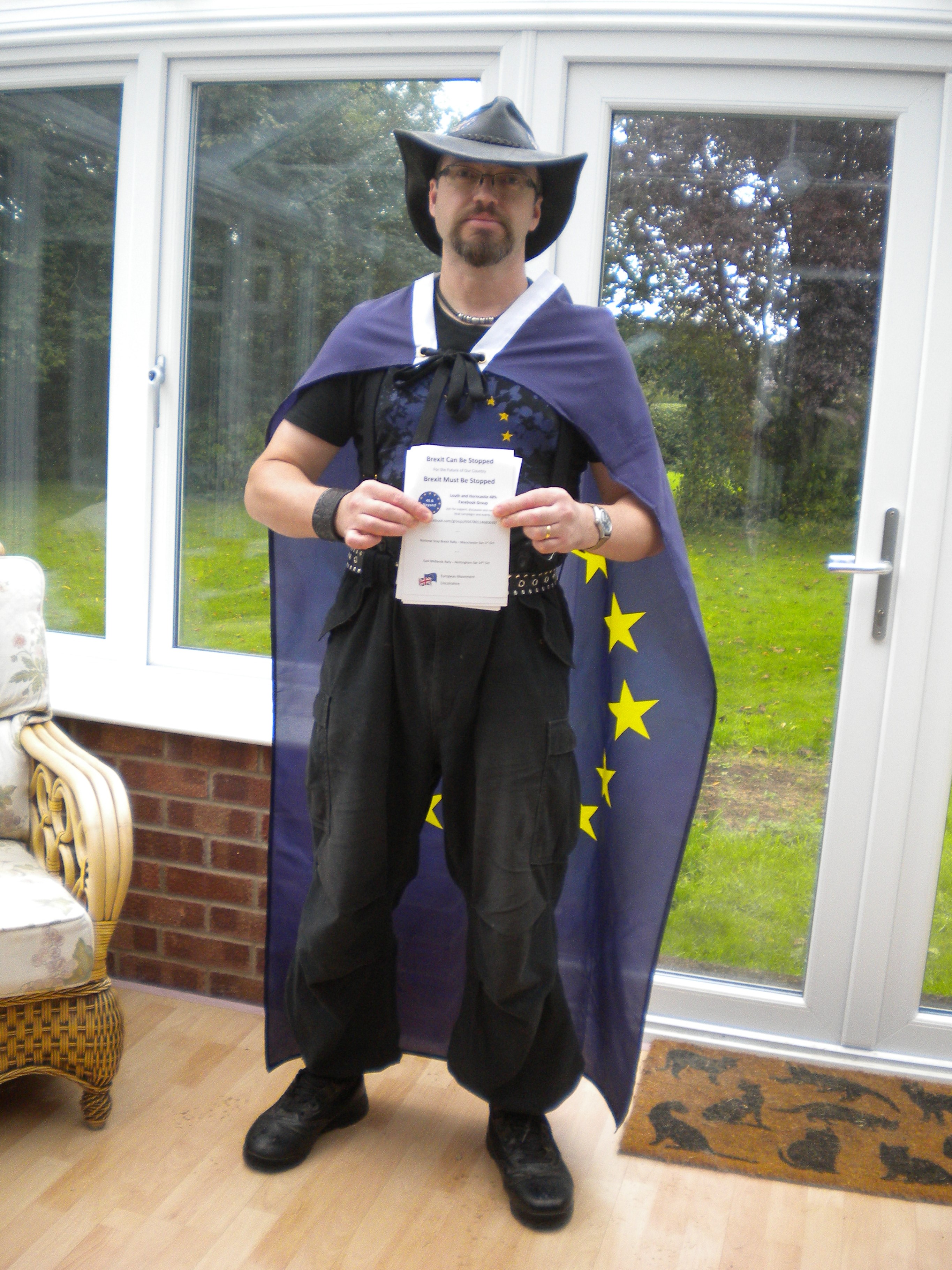 Over the last few weeks one of our newer members Simon Gardner has been out and about campaigning in Louth & Horncastle - he has certainly attracted people's attention so we asked him to write about his experiences.

They say that if you can’t spot the nutter on the bus, it’s you. A few weeks ago I realised it works the same way when it comes to campaigning: if you can’t spot the person leading the fight against Brexit in your area… There was no-one doing it, not here in the Louth and Horncastle constituency. No-one on the streets campaigning; and yet even in this area, 30% had voted Remain. So where the hell were they? Why wasn’t someone doing something? Oh right… that’ll be me then.

Wearing my EU stars t-shirt, wrapped in an EU flag like a cloak, and armed with leaflets advertising the Manchester Stop Brexit Rally, the East Midlands Rally in Nottingham, the local constituency 48% Facebook group (which at that time consisted of just the moderators and me) and bearing the Lincolnshire European Movement logo, I got out on the streets. I had absolutely no idea what to expect. That first time, when my wife offered to come with me for moral support I said no. I didn’t want her to be in danger if things got ugly. I really didn’t know what was going to happen. 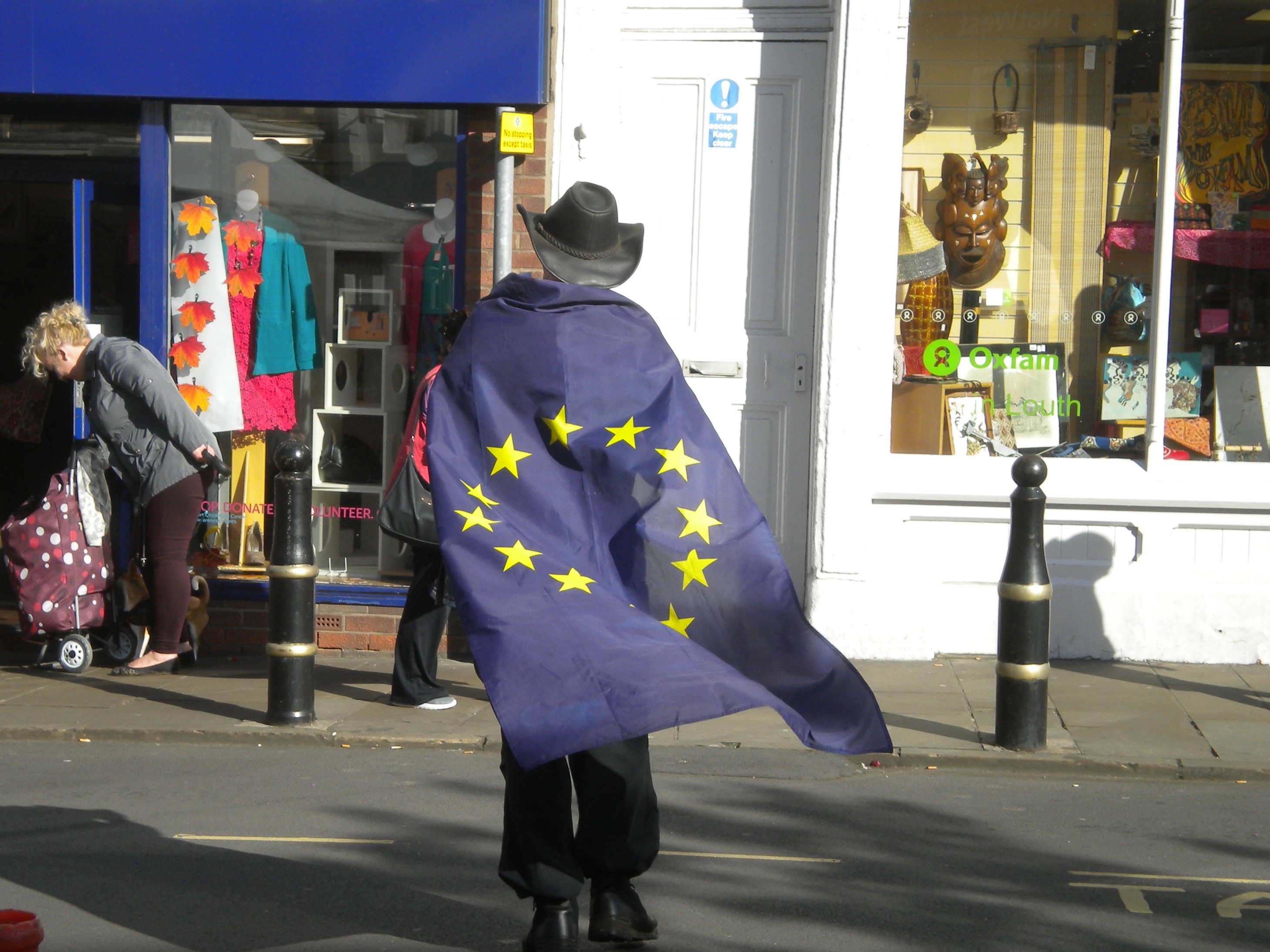 What actually happened when I bounced up to random people with a big grin and a cheery hello and asked if they’d like a flyer about reversing Brexit was that almost everyone took one and nobody thumped me. OK, the fact that I probably look like someone it wouldn’t be wise to thump may be a factor here, but I honestly believe it’s more down to the basic decency of the majority of people, no matter how they voted.

So I’ve kept at it, an hour here and an hour there, leaflet-bombing the unsuspecting populace in my Captain EU flag-cloak. I’ve had all sorts of reactions. Firstly, a really heartening level of support; so many people have told me they’re glad someone’s doing something in this area. They’re out there you know: the Shy Remainers, millions of them just waiting to be mobilised (our local 48% Facebook group is now pushing 30 members).

Yes, there’s been the occasional ranty, mouth-frothing Brexit zealot. But even that has its positives; after all, what passers-by see is a slightly unhinged Leaver going red in the face and jabbing their finger, and a friendly chap in an EU flag nodding politely and talking calmly and reasonably. That sort of thing influences people.

I’ve had any number of firm but polite rejections, and what’s surprised me most has been the number of people who told me flat out they’d voted Leave and nothing I said would change their mind, but it was good that I was standing up for what I believe in. The whole experience reminded me of something I think it’s easy to forget: most Leave voters are decent, reasonable people who genuinely believed they were doing the right thing. Will it be easy to change their minds? No, of course not; but I really do believe that as long as we can keep our campaigns positive, there’s huge potential.

Do you have any campaigning tales to tell? Do you live in the Louth or Horncastle areas and would like to help in that area? If so please contact us.